Showdown (also known as SD) is the 13th released map in Combat Arms. It was a Combat Arms EU-exclusive map until it was released to the American version of Combat Arms in the 4-29-09 Patch. Showdown is a Chinese (note that there are neon signs with Chinese characters on it) urban jungle, where the players are in an alleyway (or a small courtyard) with accessible buildings.

Showdown is fairly straightforward, but it can get confusing if too many players are playing. The map's back story is according to Nexon, terrorists are selling and shipping black market goods to high class criminals across the world. The local police force is not trained enough to deal with such group, and the players are sent in to deal with them at their base depot. It is unclear as to which team, Alpha or Bravo, is the terrorist or the military group.

Players on Alpha spawn in an upstairs room with three exits. One exit leads out onto a catwalk which can be used for sniping or can be jumped off to sneak into the enemy's territory. The second exit, some stairs, leads into the lower room of the base with two exits: One leading into the courtyard, and another leading below the catwalk. The third exit, a hole in the floor, leads into the same room as the stairs.

The players of Bravo could possibly become lost in their own base. From where they spawn, they can either drop down off the ledge or leave out the door. Dropping from the ledge allows one to hide behind some crates, go to the courtyard, or turn right to arrive at the stairs. Taking the door will bring him/her to a small hallway in which they can descend the stairs or go out onto the canopy. Going down the stairs brings to a small area where one could walk under the canopy. 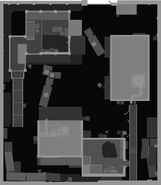 The courtyard is what is separating both Bases from each other. There are a few crashed, run-down trucks that provide cover from CQB firefights and possible sniping from the bases' windows. There are also several paths that allow entry to the bases on the sides, and a path to a cargo loading zone part of an inaccessible warehouse that can be used as potential camping. In fact, this map is unfortunately common in campers. There are too many hiding spots outside Bravo base, making it virtually impossible not to notice at least one camper per game.

There are not many know glitches to this map due to it being out in the EU Combat Arms before it arrived in North America, however, there is one located in the back of Bravo site, on the farthest back left corner wall, where if anyone was to push their player at the corner, then left, they can enter a small void underneath Bravo's base, allowing them to spawn kill players as they appear. However, even though this glitch is available, it is very difficult and in the open, so if a player attempts to enter this void, they are most likely to be shot before doing so.

1/40
Community content is available under CC-BY-SA unless otherwise noted.
Advertisement