CAWiki
Register
Don't have an account?
Sign In
Advertisement
in: Articles in need of cleanup, Maps, Featured Articles, 2008

Sand Hog (also known as SH, Hog, or Sand) is the 10th map/warzone to be released in Combat Arms of North America during the 11-12-08 Patch. Players have been left to wonder if the map is found somewhere in Somalia (see Trivia), but truly is found in either Israel or Egypt according to Nexon's website. A lonely, terror-stricken wasteland, Sand Hog features an abandoned warzone with sand-colored buildings and roads with crashed vehicles, since it is still used as a combat warzone. The combat warzone features a downed Blackhawk transport chopper, which is the reason why the UAF was sent.

Sand Hog contains Elimination, One Man Army, Capture the Flag, Spy Hunt, Search and Destroy, and Last Man Standing being the first map not included along with the original release that can play Search and Destroy. It is the first added-on map to feature the game mode Fireteam.

Sand Hog is made of several "sectors" that help to split up the map to make it easier to describe. 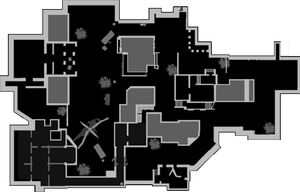 Out in the Open

Directly outside Bravo's base is an open area with hiding spots on the sides and a crashed helicopter and truck on each side of it. There are a three different ways out:

The Wall is usually inhabited by snipers.

Most of the action takes place either out in the open area or on the wall. The wall overlooks the area, and can be used for sniping. Bravo can ascend right outside their base, but Alpha has a bit more of a run before they get there. By the time Alpha arrives, Bravo tends to be ready for them.

Right below the wall and towards Alpha's base is an area that tends to be used for spawn camping. It houses a building with steps that are used for mines and sniping, a side path to go right under the wall and to the field, and another area that is a mini-field, where a lot of battle commences.

Alpha Site is comprised of an open space for spilling out and splitting into several paths, and a building accessible from each side. There are several cramped spaces for hiding in, but they are useless since they are, for the most part, put off to the side. 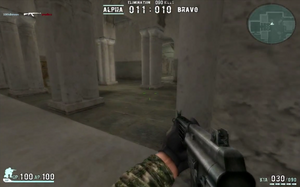 Bravo Site features a small building which can lead out in the middle of the field or to a small area. There is a ladder here leading up to the upper level. The inside of the base is littered with trash, making the area seem like a very musty hideout, yet the structure appears that it was once a strong one, before the walls were blown away. One of the bomb sites resides in this very room, in the corner behind the table and column, making campers more of a problem for those who wish to plant the bomb here. This site is the target of rockets, frag grenades, and even the rare gas grenades.

There are more sectors in campaign mode, but they are unknown at this time.

This map is packed with glitches, and players exploit them in what seems like every match to some people. It has been noted that players have been shot at from Bravo's base... through the wall. This is because players run into one of the walls with a knife to walk into the wall, jump into the window room, and can then traverse the outside of the map, going behind the building, and going outside the center battlefield, where one can be harmed, but only if he/she is noticed. One can also stay in the room and shoot through the window, where enemies can't hit him/her unless they get in.

Before this glitch was found, players could run into a wall near Alpha Site and get behind a gate, where they are barely visible, yet almost completely invincible. Some players have even been noted as standing on the top of buildings and shooting from inside the helicopter and the truck not too far away.

This has caused outrage among players.

Another less practical glitch exists outside the large building in front of Alpha spawn, on the wall facing Bravo. A player can jump onto a ledge on that wall, and walk to the corner by the metal fence, then scope in with any weapon and attempt to walk forward into the corner. One will fall underneath the building, able to shoot from underneath the floor. However, this glitch is rarely used because it is very easy to get shot in an attempt.