Red Canyon mainly consists of a desert landscape and a stronghold facility. The canyon itself is not part of the playable map and only acts as scenery behind Alpha's spawning point.

Alpha team's spawning point is alongside the edge of the cliff of the canyon; from there, there are three pathways that lead to the facility, one of which branches out from another. Each pathway is separated from another by way of immensely high cliffs.

The left-hand pathway is inclined and starts as a branch of the middle one, close to Alpha spawn. It leads to a hole in the wall at the side of the building, high above the ground — slightly higher than the penthouse level. This pathway is one-way; that is, once the player jumps off the hole in the wall, he/she cannot go back, due to the difference in height levels.

The right-hand pathway zigzags its way to the general right side of the facility. Here the player has easy access to the right door of the front entrance, as well as the side door. The right-side pathway and the middle pathway are linked right at the very front of the construction, through a narrow pathway of gravel.

Bravo team's spawning point is a large oval area behind the facility. From there, there are two places a player can go: take a left pathway that leads to the general side of the facility; or directly take the back entrance on the right. Alpha's right hand side pathway and Bravo's left hand side pathway are a single pathway but are blocked off each other by a wall of rocks.

In the heart of the short building is a main lobby area with many staircases. Around this lobby are many hallways that lead to it; and dead ends. There are also approximately 4 storeys, with the bottom one underground and the top one as a penthouse.

The taller building mainly consists of a long staircase that leads to the very top balcony. The top balcony is fenced but can be shot through. From this balcony, the entire penthouse and hole in the wall can be viewed. There is also a balcony directly below this one, which can be accessed through the hole in the floor. This lower balcony is not fenced and can be jumped off without harm. 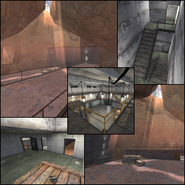 The canyon behind Alpha's spawn

View of the Penthouse & Taller Building from hole in wall

The left pathway and direct entrance to building from Bravo spawn

Upper Level of the Short Building

Penthouse of the Shorter Building

A glitch involving the player appearing down the ledge [as shown in the circle].
Community content is available under CC-BY-SA unless otherwise noted.
Advertisement