View source
watch 01:40
The Sandman Will Keep You Awake - The Loop
Do you like this video?
Play Sound

Pump Jack (also known as PJ, Pump, or Jack) is the 3rd map released in Combat Arms; being one of the original five maps. Pump Jack features a large building with two spawn points at each end, with a large above ground territory and a sniping post in between. Game Modes available for this map are Elimination, Elimination Pro, One Man Army, Capture the Flag and Last Man Standing.

s several trains in the area, some light posts, sheets of metal, boards, and the pumps. The map itself is a fenced in area; the tunnels are blocked off, and the doorways are reduced to rubble. The upstairs is mostly used for sniping or rushing, and control of the area is often fought over by the two opposing teams.

Pump Jack has only four different areas, and each is quite small. Together, however, you can have a good-sized map.

Both bases, Alpha and Bravo, lead upstairs to the "Box Room" as it is called for the wall of boxes usually used for sniping, and the stack of boxes in the room near the doorway. There is a forklift in this room, and a stairway of boxes that lead up to an open wall used for sniping.

The various train cars in the area tend to be scattered, and entry leads into a rarely-used camping spot. You will find two sides, left and right, and another exit. People that do camp here stay in the corners and rarely get kills here. Planting mines on the entrances is a good plan for keeping people out... or in. You can also shoot through the wood making up the wooden trains to kill enemies inside without being visible.

The upstairs level, also known as the "Box Room", is an important area of the map. The Box Room can be accessed from both Alpha and Bravo base. It can also be reached by climbing the boxes outside, but attempting this can can leave you vulnerable to attacks from behind.

The room contains a small forklift and metal sheets hanging on the walls as their way of blockades. This helps assist snipers who wish to camp behind the boxes in the room.

Alpha's base is littered with metal and wood, as if it was meant for construction but left alone because war took place there. There have been some foggy windows added in, and the place seems well into working before it was left. It features two exits to the spawn room, both leading into a hall with some boxes and three exits. Two exits lead outside while the other leads up the stairs which have rails for camping. It leads to the sniping post.

The outside has several trains and then a fence with an inaccessible area and a wall with space between to hide.

Bravo's place of operation is simple. The spawn room features a large pole in a rectangular prism shape, and like Alpha's base, it is littered with metal and wood, and two exits. One exit leads out to the stairs and outside, the other leads to the tipped train outside. Taking the stairs up leads to a hall and then into the sniping room. The stairs can be camped on, but i 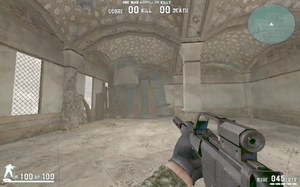 t is much more difficult to kill somebody due to the limited camping.

There is a tipped train outside Bravo's spawn point. It is good for Alpha to camp in. There is also a broken feature outside the doorway across from the tipped train. It can be climbed onto with assistance or by being given a boost. The walls above the stairs have been worn down, and now the inside of the wall is visible, as if the brick has been chewed up by some form of erosion.