NEMEXIS Labs is the newest Fireteam map in the game, Combat Arms' 41th released map on the 12/07/12 content update, as well as leaked two day prior by the Community Manager at the time, Khali. This fireteam is a continuation of the Nemexis HQ fireteam (It takes place directly after HQ).

NEMEXIS Labs is the second straightforward Fireteam mission (NEMEXIS HQ being the first).

The players enter the Mech hanger and can choose a Mech (this is optional). To pick a mech, stand by it and hold E (default). Remember, YOU CANNOT change your decision or leave your mech. Mechs have unlimited ammo. You will then proceed to go to all the rooms where NEMEXIS Agents come flooding out. Once you manage to take the timer down, the stair way to the second floor is opened and you will be fighting instead of Agents more mechs like the ones you fought in Stage 1. After going to all the floors. D.R.E.A.D. will appear. This time, it should take fewer than 2 minutes to defeat him. After this, a cinematic will appear. You will then spawn to the third stage.

Ending 1: The fireteam infiltrated the labs. They defeated DREAD, and checked out what this superweapon was. They were defeated by the superweapon.

Ending 2: The Fireteam infiltrated the Labs and commandeered the mechs. But unfortunately, DREAD and/or the Nemexis agents defeated them.

Ending 3: The Fireteam infiltrated the labs. They defeated DREAD, and checked out what this superweapon was. They managed to defeat the superweapon, but the NEMEXIS director escaped...

These are the mission updates that will be sent to players by various characters as they progress through the mission.

CC: Coleman here. I'll be commanding this op into the NEMEXIS Mechanized Lab. Our main objective is to search the lab for key intelligence and send it back to HQ.

CC: We're still accessing schematics of the complex. See if you can locate the system hub in the restricted area. You are hereby authorized to use deadly force to secure this intel. Good luck, gentlemen.

SE: Multiple enemy contacts ahead. Looks like they've been alerted to your presence. Proceed through the right hand lab.

SE: We're establishing a secure uplink with HQ. Eliminate all hostiles while we transfer the data.

SE: There's another system hub in the area ahead. Move to secure it!

SE: We're establishing a secure uplink with HQ. Clear out any hostiles while we transfer the data.

SE: Tracking an unknown signal near your location. Be on alert.

CC: We have control of the hangar doors. Use them to proceed to the next sector.

CC: Take control of the robots and move to the next sector. We're reading different weapon configurations on each robot. We'll transmit specific piloting instructions to each of you once you activate the robot.

CC: Analysis confirms that the hostile forces consist of attack robots with SMGs, sniper rifles, and melee weapons, supported by repair robots. Use your robot's special armaments to take out the enemy.

SE: Looks like you've got a clear route to the 2nd floor. Proceed with caution.... there's no telling what else is down there.

SE: "Take them out before reinforcements arrive!"

CC: "Someone is jamming our uplink! They make have taken control of the lab systems, so watch out for new hostiles in the area."

SE: "HQ, come in! The blast doors are opening! Do you have control of the complex?"

CC: "Someone has assumed direct control of D.R.E.A.D, but it's not a completed model. We've got a shot at taking it out!"

CC: "HQ here, uplink re-established. We have full control of the system. Good work, everyone. Proceed to the next sector."

SE: "We've made it to the next sector.. Wait, what is that? HQ! We're under attack from an unknown target! This thing is huge!"

CC: "That's a Dreadnought... but it should be locked down! Someone's set a trap for you! Quickly, take out that Dreadnought before it does too much damage!"

SE: "The Dreadnought is using the repair array to patch itself up. It's helpless! Now's our chance!"

CC: "We've got a problem. Once your fuel runs out, the robot will start to overhead, and may explode. You've got to bring down the Dreadnought before that happens."

CC: "You've got 30 seconds of fuel left! If you run out, the system will auto-eject you!"

CC: Looks like everyone made it... and the enemy reinforcements are cut off. It's just us and the Dreadnought, men! Let's take it out! 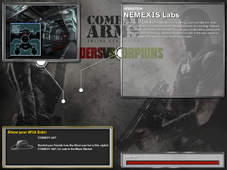 The splash screen for NEMEXIS Labs. 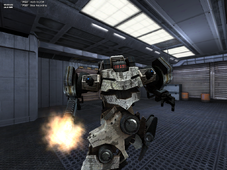 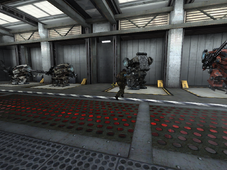 The main room containing the mechs for players to use. 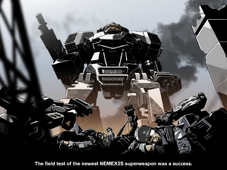 The ending scene if the players are defeated by Dreadnought or if time runs out. 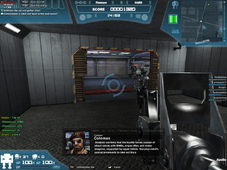