Heir of the Tomb is the 61st map in Combat Arms. It was released on February 17th, 2016 on Combat Arms Europe/North America.[1]

This map takes place in a cemetery/graveyard. There is a hall in the middle of the map where ambushes can take place in every direction.

Alpha and Bravo's spawn points are outside the hall, where tombstones are scattered everywhere.

The tombstones and the windows at the hall are breakable props.

Heir of the Tomb has 8 game modes available to play in:

Tombstone destroyed.
Add a photo to this gallery 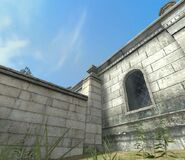 Add a photo to this gallery

Retrieved from "https://combatarms.fandom.com/wiki/Heir_of_the_Tomb?oldid=263624"
Community content is available under CC-BY-SA unless otherwise noted.