View source
watch 01:40
The Sandman Will Keep You Awake - The Loop
Do you like this video?
Play Sound

Dredge is the 26th map released in Combat Arms, introduced in the 8/24/10 patch.

The Game Modes that can be played on Dredge are:

Dredge takes place in an unknown sewer line and pump station. It contains mutiple hiding and sniping spots, which are suited for both Long-Range and CQC.

Contrary to popular belief, Dredge is almost symmetrical. There is almost no difference between either base. However, Bravo's gate will always start out closed, while Alpha's will always start out open. In addition, Dredge has two floors, and plenty of crates to hide behind. There are two direct paths to either base; the upper-level walkway, and the long, winding sewer route. Either way can be dangerous in a crowded room, but it's best to stick to the path that you're most capable of defending.

Dredge is a sewer. As such, the area is a maze of twisty tunnels, ladders, catwalk, tight corners, and dark blind spots. Be prepared to move and move fast when fighting in this area. Sightlines for the most part are very short and attacks will frequently come at you from unexpected directions. Be careful of fighting in the large, water filled rooms, as opponents will try to fire at you from the catwalk. Firing back at them is problematic as your bullets will often be blocked. Beware of the tunnels, as enemies will lurk in that area. They are also a favorite location for mines and auto-turrets. The long straight corridors contain a few ideal sniper's nests. 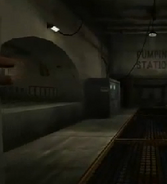