Taking place in the same city as Sand Hog (and possibly Desert Fox), but in a different location, this campaign features a rescue mission to retrieve some vital intel from a fallen squad.

Here are some elements that you will encounter.

These are the mission updates that will be sent to you by various characters as you progress through the mission.

CC: "This is Colonel Coleman. The current mission is to rescue a member of the special forces of the Intelligence Bureau, being held hostage."

CC: "We've received word that the hostage will be executed any minute now. Hurry and get to the target area. Once there, we'll radio you more details."

CC: "In case you end up without any ammo or first-aid, the enemies are equipped with a supply of rifle ammo and first-aid kits."

CC: "You won't be able to use enemy ammo for sniper rifles or machine guns. so be sure to conserve your ammo as much as possible."

CC: "The hostage we are rescuing was able to successfully infiltrate Mogadishu to find evidence of Sand Hog's illegal weapons trade. Unfortunately, he was caught by the enemy."

CC: "In order to get the green light for Sand Hog's explosion, we will need concrete evidence to present to the Parliament. We must rescue the hostage and find out exactly where the key information is being hidden."

CC: "It looks like the enemy is about to execute the hostage! There is no time! Hurry! Move, move! Rescue the hostage within 5 minutes!"

SE: "Our UAV have sent us images. The hostage appears to be on the second floor of the temple."

SE: "The door is locked! find another stairway!"

SE: "There might be some booby traps here! Watch out!"

CC:"Watch out for the soldiers in black! They are Sand Hog's royal guards and are extremely dangerous!"

SE: "The hostage is dead. However, we found an encrypted memo. I will transmit the memo to headquarters."

CC: "It's unfortunate that the hostage is dead. The encrypted memo contains the location where the information is hidden. Once you enter the town, I will transmit the target area via the GPS."

SE: "Enemy tanks in sight! Watch out for their cannons!"

CC: "It's impossible to destroy the enemy tanks with the weapons you currently have. Avoid the hill and make a detour towards the alley."

SE: "The tank's engine cover seems to be open on the image that was sent from the UAV. You know what to do, right?"

CC: "The enemy troops will have an ambush waiting for us in town so be extra careful."

CC: "The encrypted memo points to the location marked by the GPS. You know where it is, right? Move immediately!"

The terrorists at the temple.

A guard (left) holding a LAW and carrying a RPG-7 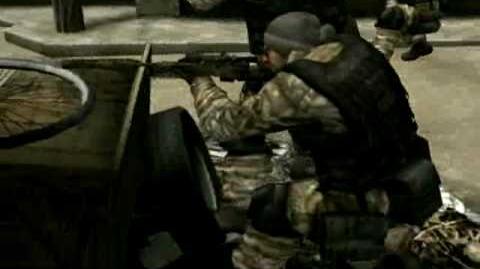