Death Row is the 39th map released in Combat Arms, which was released on 08/12/12. It is the second map playable in Hired Guns mode.

Taking place within a prison, Death Row involves the battle to seize the compound and it's five control points. Being a Hired Guns map, the player may use points to obtain NPC mercs to fight for their side.

As of the 12th of October, 2012, Second Wind update, this map is now available for more game modes. For Elimination and Elimination Pro, it has been stated that the map has been slightly reworked.

The Hired Guns system on Death Row works differently than the one on Blood Money. The most visible difference is that the Hired Guns menu may only be accessed from the spawn, and captured control points. There are also different mercs to hire, namely the classic Scorpion, Raven, and Souza, with their respective custom weapons. In addition to mercs, the players may also spend points (2000 Points) to activate pre-placed turrets. One may also spend points (1000 Points) on replenishing their health and/or ammo.

A further in-depth overview of Death Row can be found here.

There is an unfortunate exploit in this map. A player can spawn AI mercs indefinitely at the control points for another player to kill over and over - which grants XP and improves one's kill ratio - just as with killing an actual human player. This makes the Death Row map in Hired Guns mode attractive to players who abuse this exploit as a way of powerleveling. Currently Nexon has not remedied this. This exploit, however, is bannable.

This map's name was decided in a contest, among the following names: 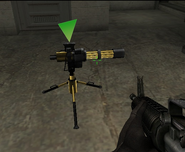 the auto-turret, exclusive to Hired Guns.