The Game Modes available for Bloodbath Bazaar are:

FPS General has teamed up with Nexon America to release an exclusive preview of some brand new content coming soon to Combat Arms.

The footage above showcases a brand new map, coming very soon to Combat Arms. The map in the video takes place in Istanbul, Turkey. Combat Arms developer, Sniper, shares some behind the scenes insight on the map development: That left the Mosque, which we felt expressed the rich cultural heritage of Turkey best of all. It was still a technical challenge for us, though, because we would need to re-work the layout of the Sultan Ahmet Mosque to turn it into a quality FPS map.

After a long period of consideration, we decided to commit to this plan, but alter the map concept a little to be "Small bazaar street in Istanbul with a view of the mosque".

We reinforced the theme and setting of the map by placing Turkish flags, carpets, and other decorations all around. We also arranged the map to emphasize the unique appearance of the mosque. http://www.fpsgeneral.com/news/comba...content-update 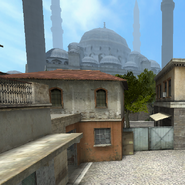 Clipping into the Boxes
Community content is available under CC-BY-SA unless otherwise noted.
Advertisement