The Ability System is an in-game feature that provides special abilities through the use of items. It was released during the first part of the Fusion Update (Enhance), on 8/25/11.

Abilities are categorized into two types: Active and Passive.

Players have three ability slots, which can be filled by up to three abilities. Some abilities take more than one slot, however. Equipping them limits the amount of abilities a player may bring to battle.

Like other features, such as Friendly Fire and Kill Cam, the Ability System can be turned off by the Room Moderator.

These Abilities require only one Slot, and are available for Permanent duration as the player ranks up.

A honed throwing arm allows the player to throw a grenade farther.

When you kill an enemy player, there’s a chance they may leave behind Limited-Ammo, All-Ammo, or Recovery Items! You will have a short time to pick these up, after which they will be free for your team to recover.

Obtaining a Multi-Kill increases the jogging speed to the sprint speed and will not cost any Stamina.

Obtaining a Multi, Ultra, Fantastic, or Unbelievable Kill while the effect is still active refreshes the duration of the effect. This effect resets if you die.

Sprint is disabled while the ability is active.

Added in The Belly of the Beast Update. Obtained through Shop.

Allows the player to pick up weapons from a dead player's backpack.

Earn 10 GP for any firearms recovered from fallen soldiers during battle. This ability works up to 10 times per match.

Drops a weak grenade upon dying, even if the player did not have one in his inventory. Used by the Sand Hog militants in Fireteam. The "no explosives" room setting prevents this ability to work.

Added in the Best of the Best Update. Available in the Shop for NX and GP.

Installs a reusable "Warlord" that allows allies to refill partial amounts of their primary & secondary ammo. The warlord can be destroyed by both teams, and requires all three Ability slots.

Prevents the loss of stamina for a short period of time.

Improves accuracy for both you and your teammates. This ability will not apply to any weapons not dependent on accuracy (such as Mines or Claymores).

Added in the Cover of Darkness Update. Available in the Shop for NX and GP.

Allows the player to trade all his/her sprint stamina to recover lost HP.

Marks enemy traps (e.g. mines) via red indicators. This ability was avaliable for permanent duration on 12/21/12, at a price of 900 NX.

After the 8/27/2014 Scheduled Maintanence, 6 new abilities have been added to the game. They are upgraded versions of the original abilities. They feature "gold" in their name, along with a gold star, gold border, and gold coloring in their icon.

As with all game features, there has been plenty of criticism regarding the Ability System's flaws. 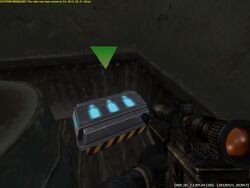 The warlord dropped by the "Warlord" ability.